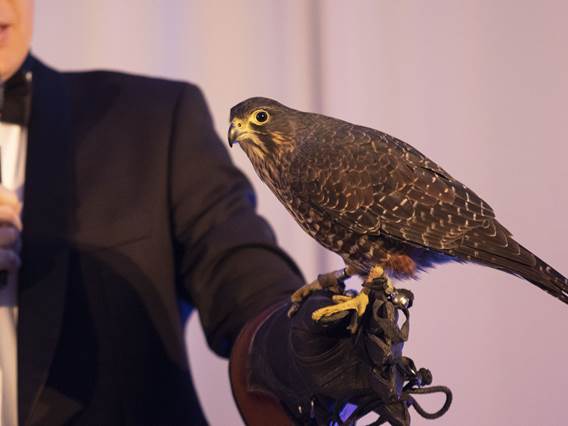 A new initiative aiming to gain insight into the alpine habitat of New Zealand’s at-risk kārearea falcon has received a significant boost of $54,000 from this year’s Real Journeys Birds of a Feather Conservation Ball.

Wayfare Chief Executive Richard Lauder says the sold-out event, held on Saturday 17 August, was the first time two of the Wayfare group companies have worked together to help conservation.

“The money raised will enable the Cardrona Kārearea Conservation Project team to close a significant knowledge gap in the scientific understanding of kārearea in the South Island high country environment.”

The endemic kārearea, also known as the sparrow hawk, is New Zealand’s only falcon species and a taonga within our environment. This species is also New Zealand’s most threatened bird of prey, with predation by introduced mammalian predators, loss of habitat and wide-ranging human impact all having an adverse effect. Cardrona Valley has a small population of kārearea, presenting an ideal opportunity to develop a science-based conservation approach in tussock grassland montane ecosystems.

The 121 guests enjoyed canapes and live entertainment on the vintage steamship TSS Earnslaw during its cruise over to Walter Peak High Country Farm, before sitting down to a specially designed three-course gourmet dinner created by Executive Chef Mauro Battaglia at the Colonel's Homestead Restaurant.

Each table’s centrepiece featured an interesting fact about the kārearea such as, the kārearea does not build a nest, rather, it makes a scrape on the ground, under logs, in trees, on rock faces.

The money raised will enable the Cardrona Kārearea Conservation Project team to close a significant knowledge gap in the scientific understanding of kārearea in the South Island high country environment.

Award-winning comedian and charity ball MC Simon McKinney kept the laughs flowing and popular Queenstown band LA Social had the dance floor pumping, but the star of the night was undoubtedly Hera the kārearea, captivating guests who grabbed the opportunity to interact with her after the dinner service.

During the evening, the live entertainment was complemented by a silent auction, mystery raffle and a live auction with auctioneer extraordinaire Brendan Quill - aka ‘Quilly’. Two unique auction items - ones that can’t normally be bought - were donated by Wayfare-owned companies Canyon Food & Brew Co. and Cardrona Alpine Resort, and Richard says these bespoke packages were very popular with bidders.

“The Canyon VIP Guest Brewer experience gives the winning bidder an opportunity to brew their own beer, can it, and then design their own label with assistance from Canyon Food & Brew Co.’s marketing team, while the Starry Summer Night at Cardrona experience gives four people a private stargazing tour including a three-course dinner at Mezz, followed by a sunset mountain tour in one of our mountain vehicles, then a night in one of our apartments with breakfast in the morning.”

Since its launch in 2015, the Birds of a Feather Charity Ball has raised almost $340,000 for conservation.

For more information about the conservation ball visit:  https://www.realjourneys.co.nz/charityball

About the Cardrona Kārearea Conservation Project

The project will include targeted observations of breeding pairs, along with leg-banding and tracking of individuals to gain insight into habitat use and territory size, information that is critical for creating a long-term, effective plan. An integral component of this project is education and community engagement, with local school children, residents and visitors to the region being introduced to the kārearea through multiple platforms. Extensive assessment of the impact of exotic predators will allow the development of a targeted predator control strategy. In combination with habitat restoration, this project will not only conserve this population but also develop knowledge to support the conservation of kārearea throughout the wider Southern Alps.

A period of sustained growth led Real Journeys to establish the ‘Wayfare’ group to represent its tourism companies in the international market and provide integrated services to its trade customers.  With one point of contact, Wayfare makes it easier to do business with its family of five leading experience brands; Real Journeys, Cardrona Alpine Resort, Go Orange, International Antarctic Centre and Canyon Food & Brew Co.  The name Wayfare, which means ‘to travel or the act of journeying’, was chosen because of the link back to Real Journeys and its association with New Zealand as a nation of wayfarers and travellers.